You are here: Home / Destination Management / Political Turbulence and Destination Resilience: A Case Study of the Struggle of the Tourism Industry of Nepal amidst Political Instability

Nepal has suffered from various forms of political instability since 1990: civil war related to the Maoist uprising (1996- 2006); a royal massacre in 2002; and economic blockade by India in 2015.These crises had severe impacts on the Nepalese tourism industry, and most apparently, fluctu- ations in the number of tourists visiting the country. This paper explores how tourism in politically unstable destina- tions can develop during and after a political crisis, taking Nepal as a case.

For any country, political stability is a pre-requisite for its tourism development (Fletcher &Morakabati, 2008; Rich- ter & Waugh, 1986). Political instability denotes a situation when the mechanisms of a government and its rules are challenged and disturbed by forces operating outside the normal functioning of the political system (Hall & O’Sulli- van, 1996; Ingram, Tabari, &Watthanakhomprathip, 2013;Williams, 2012). Pizam&Mansfeld (1996) identified four possible forms of political unrest that damage the tourism industry: coup d’état, violent demonstrations, uprisings, and riots. Political instability in Sri Lanka (Beirman, 2003) Fiji (King &Berno, 2006), Palestine and Lebanon (Assei- ly&Lawday, 2003) reveal that it can have devastating im- pacts on the tourism industry in emerging destinations. Conversely, Blanchard & Higgins-Desbiolles (2013) argue that tourism may contribute to peace, though there are also limitations to this.

The effects of political instability are direct and far-reach- ing. First, tourists often decide their travel destinations based on the political stability of the respective destina- tions; they always have alternative destinations to choose from (Richter & Waugh, 1986). This argument is similar to that found in (Buhalis& Costa, 2006) who believe that tour- ist perceptions of safety and security are key determinants of the destination attractiveness. Next, Ivanov, Gavrilina, Webster, &Ralko (2017) assert that the impacts of politi- cal instability are not limited to the decrease in tourist ar- rivals and the length of stay in the destination; they may spread throughout the entire region. As a consequence, income and employment opportunities in the tourism sec- tor decline. Furthermore, depending on the nature of the crisis, the image of the destination can be negatively in- fluenced. The impact can be temporary or long-term. In Nepal’s case, the tourism industry quickly recovered after the 2015 mega earthquake and subsequent political turbu- lence, whereas cases of other destinations like Israel after the Palestinian uprising in 2000-2002, took much longer to recover (Beirman, 2003).

There is an increasing concern in tourism academia over political crises and their implications for the tourism industry. No destination is free from the possibility of cri- sis, which calls for a strong crisis management system in all destinations (Gurtner, 2007; Laws, Prideaux, & Chon, 2007; Pforr, 2009). For example, Gurtner, (2007) infers from the case of the 2002 Bali bombing that effective crisis management can lead to a quick recovery. Similar findings emerged from the study of Beirman, (2007) who reported that careful crisis management by the Kenyan tourism in- dustry led to the significant recovery from the crisis left by terrorist activity in 2002. However, there is no universally applicable model of crisis management, so every destina- tion needs to develop one that fits into its political environ- ment.

The goal of this research was to analyse political instability in relation to the nature and speed of tourism development using Nepal as a case study. At first, a literature review on tourism and political instability was undertaken. Besides, relevant news and opinion pieces, government travel ad- visories and other documents related to the research topic were consulted. Next, qualitative semi-structured inter- views were conducted with stakeholders in the tourism in- dustry in Nepal. The participants included representatives from the tourism industry and political organisations, tour- ists, and also people from various walks of life such as stu- dents and academics. Such a variety helped the research- er to collect and comprehend the situation from different dimensions. The original research was undertaken as the final part of the TDM in 2008 and has been updated re- cently in 2018 to compare the current situation with 2008. In total, 40 qualitative interviews from both occasions form the basis of this empirical study.

The civil war phase was the most disastrous crisis for Nepal. It accounted for more than 15000 Nepalese lives (Upadhayaya, Müller – Böker, & Sharma, 2011). After the ceasefire in 2006, an encouraging recovery in the tour- ism sector was witnessed with 526,705 tourists visiting in 2007, which surpassed the pre-crisis figures of 463,684 in 1998 (MOCTA, 2018). Even after the formal peace agree- ment in 2006, political issues related to ethnic identities kept plaguing the aspiration to achieve peaceful and stable governance in the country. In general, a pessimistic mood was looming over the stakeholders to some extent during the research year of 2008. Travel agencies and tourism businesses still lacked confidence in the business environment despite some signs of recovery. Travel agen- cies, tourism entrepreneurs and people from various walks of civil life did not trust political parties and were sceptical about the future of the political situation and the tourism industry. The majority of participants blamed the corrupt and dishonest nature of the political parties for this.

Surprisingly, the situation portrayed by travel advisories from tourist-generating countries was found to be very dif- ferent from the actual situation. Interviews with potential tourists revealed their hesitation to travel to Nepal during crises due to negative travel advisories and news in inter- national media, whereas the tourists that had previously visited or were visiting at the time of research did not feel any security issues, and they expressed their eagerness to revisit Nepal. These findings suggest that proper com- munication with the tourist market as a crisis management strategy is crucial to deal with political crises. Due to the lack of such a system during the 1996-2006 period, politi- cal turbulence had a notable impact on tourism.

Change in the research outcomes after ten years

Even after the formal ending to the decade-long armed conflict in Nepal (1996-2006) through a comprehensive peace accord between the rebel and ruling parties, a con- tinuum of political upheavals followed. Furthermore, the situation was exacerbated by the identity politics of vari- ous ethnic groups in hilly areas and Southern Nepal. De- spite the political instability, the year 2012 saw an exciting surge in tourist arrivals with the figure of 803,092 (MOC- TA, 2018). The number of visitors, however, declined in the succeeding years and bottomed out in 2015 when the mega earthquake hit Nepal. Five months after the quake, the Southern Plains of Nepal saw a violent uprising con- nected to identity politics followed by a year-long econom- ic blockade from India. The natural disaster had no direct relation to the political instability, but it exacerbated the crisis in the tourism industry and made the task of deal- ing with political unrest much more difficult. These events caused a drop of 27.8 % in the total income from the tour- ism sector, and 31% of tourist numbers in 2015 (MOCTA, 2018)). Such events worsened the lives of the Nepalese people and wreaked havoc on the already struggling tour- ism sector.

Nepal, however, recovered quickly from the earthquake and subsequent political turmoil. The tourism industry, the government, and international media showed re- siliency by working together and consequently tourist numbers climbed to nearly one million in 2017(Beirman, Upadhayaya, Pradhananga, & Darcy, 2018).Pechlan- er&Innerhofer, (2018) define “destination resilience” as the ability of a tourist destination to be prepared for any sto- chastic shock and to be able to provide necessary facilities for tourists during and after any crisis. Meanwhile, nation- al and international media encouraged people to travel to Nepal and support its dwindling economy. Moreover, the industry also found an opportunity to develop volunteer

tourism and accessible tourism during the recovery pro- cess (Beirman et al., 2018). The increased length of stay of 13.18 days in 2015 compared to 12.44 in 2014 indicates that the volunteers who came to Nepal to help rebuild af- ter the earthquake stayed for a significant amount of time. Furthermore, other noteworthy positive impacts were the growth in domestic tourism(Upadhayaya et al., 2011) and regional tourism (MOCTA, 2018).

After the crisis of 2015, the Nepalese people have priori- tised infrastructure development, effective marketing in the international markets, and quality improvement of facilities and co-operation between all stakeholders. In this pro- cess, the international media has also helped the recovery from the post-earthquake crisis by covering crisis manage- ment efforts and motivating tourists, neither of which took place during the civil war period. These factors stood out as the crucial factors for tourism recovery after the 2015earthquake and the subsequent political crisis of the eco- nomic blockade; however, the same measures could not be successful during the civil war period 1996-2006 due to security issues and a lack of firm commitment from the stakeholders. Though difficult to implement, making tour- ism ‘a zone of peace’ was the next desired approach, to continue harnessing the benefits of tourism even during times of instability.

A review of recent global political development indicates that political instability and terrorism will continue to exist in the future (Sönmez, 1998). Hence, it calls for a continual crisis management system in the Nepalese tourism indus- try which requires co-operation between the government, the tourism industry, political organisations, and the media. Next, it is imperative to provide an accurate picture of the destination to prospective tourists (Baral, Baral, & Morgan, 2004). Effective promotional efforts are the key to tourism development for destinations suffering from political insta- bility.

However, the most unanticipated finding is that a series of political crises have developed resiliency among the Nep- alese people. The resiliency of the tourism industry and relevant stakeholders is a catalyst for the recovery from re- cent disasters. Finally, it is essential to institutionalise this resiliency to ensure smooth crisis management in future.

The results of this study have implications for destinations that are prone to frequent political crises. During and after crises, the tourism stakeholders should attempt to create a positive environment that may boost confidence in the tourism industry. However, such confidence-building must be built upon the basis of the reality of a safe situation. This study has found that generally political upheavalswere confined to a small part of the country, whereas the rest of the country remained safe for tourism purposes. If the real picture of the scale and limitation of crises can be communicated to the market and tourism stakehold- ers, the impacts of turbulence can be minimised. Once destinations develop the capacity of resiliency, tourism can explore ways to move forward even during crises and af-terwards recover quickly as shown by Nepalese tourism after 2015. 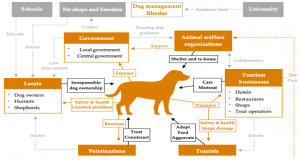